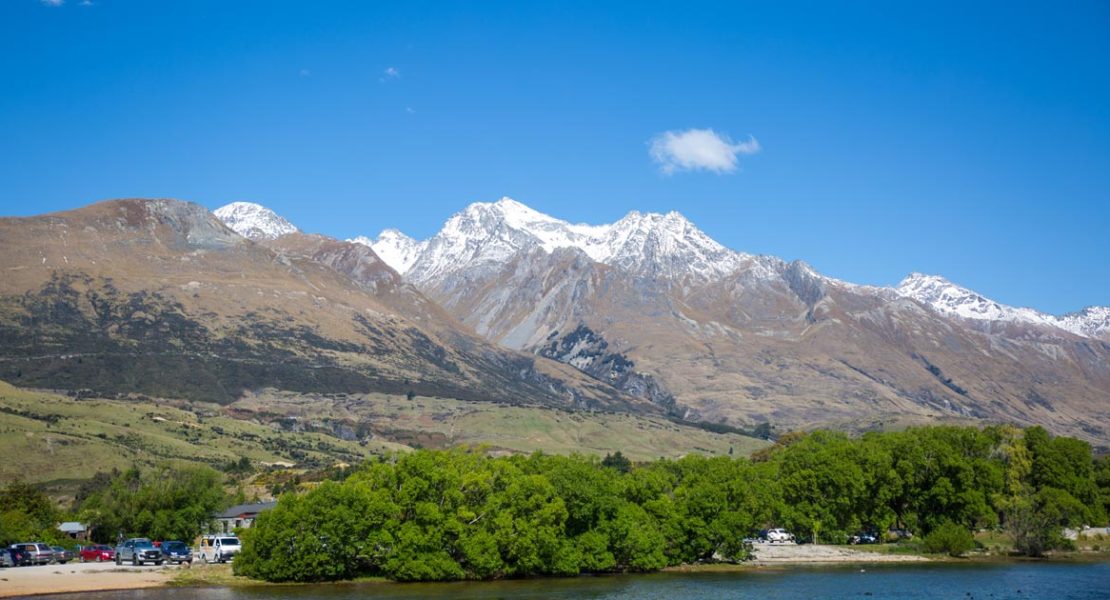 If you’ve always wanted to spend the day hiking amongst active volcanoes, learning about the country’s history and culture from its Māori residents or living out your Lord of the Rings fantasies during a tour of the Hobbiton Movie Set, visit the North Island, a 113,730 km² land of striking natural scenery that’s worthy of a great road trip. Here in New Zealand, also called Aotearoa, indigenous culture is honored and celebrated—the Māori language Te Reo is a national language along with English and New Zealand Sign Language, so you’ll see and hear it everywhere. Learning a few key phrases like “Kia Ora” (a greeting that translates to “have life”) or “Kia Kaha” (stay strong) will go a long way with the locals.

There’s plenty to see and do here so make sure you leave lots of time to make stops along the way. The roads here are full of twists and turns, so it can sometimes take more time than you’d think to get from Point A to Point B. Driving from Auckland to Wellington, for instance, takes about eight hours and it can take 5.5 hours to drive from Auckland to Cape Reinga at the very top of the North Island—and that’s without making any stops.

When To Visit the North Island

If you’re into winter sports, come to Mt. Ruapehu and Whakapapa in the winter when skiing and snowboarding conditions are best—you can also go sledding or learn to ski or snowboard at their beginner’s complex, Happy Valley. If you want to try one of New Zealand’s Great Walks, plan your trip for summer. For warm weather and fewer crowds, stick to spring and autumn.

You’ll likely enter the North Island through Auckland or Wellington. Alternatively, you could fly into Christchurch or Queenstown on the North Island, then hop a flight or catch the ferry up.

Must-Visit Towns in the North Island

Home to a bustling foodie and nightlife scene, Auckland makes a great base for trips to the Waitomo Glowworm Caves, Rotorua and sites throughout the northern tip of the island as most guided tours depart from this sprawling city.

2. Paihia (The Bay of Islands)

Base yourself in Paihia if you want to explore the popular Bay of Islands. Also make time to visit the nearby Waitangi Treaty Grounds, where you can learn more about how New Zealand became New Zealand at the Te Rau Aroha Museum.

Go for a hike at Karangahake Gorge or The Pinnacles, kayak to Whenuakura (Donut Island), cycle the Hauraki Rail Trail, snap Insta-worthy photos at Cathedral Cove, go for a scenic stroll along the Coromandel Coastal Walkway or dig your own natural hot tub at Hot Water Beach.

The Rocky Horror Picture Show fans will want to check out the Riff Raff statue on Victoria Street and do a quick Time Warp to honor its Kiwi creator, Richard O’Brien. Nearby, Hamilton Gardens hosts a collection of beautiful garden scenes from around the world so you can feel like you’re visiting India, Italy, Japan, China, England and the U.S. all in one go.

Typically where most backpackers end up being based to be close to kiwi fruit picking gigs along the northern beaches from March through May.

Wine lovers, rejoice! Hawke’s Bay, the region surrounding Napier and Hastings is home to more than 200 vineyards, over 70 wineries and upwards of 30 cellar doors, perfect if you’re a fan of Syrah, Chardonnay or Merlot Cabernet blends.

If you’re interested in learning more about Māori history, culture and how New Zealand’s Māori residents live today, Rotorua is home to several living Māori villages, thermal parks and cultural experiences aimed at introducing visitors to their traditional lifestyle. It’s also where you can catch a tour bus to The Hobbiton Movie Set in nearby Matamata.

Often visited for its proximity to the start of the Tongariro Alpine Crossing, Taupo is a charming little city situated alongside one of the most scenic lakes in New Zealand. After a long day of hiking, driving or sightseeing, stop by the Spa Park Hot Pools, a free natural hot springs by the Waikato River that’s a favorite of locals and visitors alike.

Driving Tips for the North Island

If You Don’t Want to Drive

Take in views of Tongariro National Park and its magnificent volcanic landscapes from the Northern Explorer, which brings passengers on a scenic journey between Auckland and Wellington, with additional stops in Hamilton, National Park, Ohakune and Palmerston North.

Intercity and Skip offer affordable coach service throughout the North Island—Intercity even has an overnight bus between Auckland and Wellington, complete with sleeper seats that lie flat. If you’re going anywhere more than two hours, spring for the Gold seats, which, for a few more dollars, will give you a separate section and reclining seats to make the journey more comfy. Adventure HQ provides shuttle service from Taupo to Mt. Ruapehu, Tongariro National Park and Whakapapa Ski Resort (seasonally). Those interested in doing the legendary Tongariro Alpine Crossing can also book a return shuttle through Tongariro Expeditions.

Kiwi Experience and Stray offer hop-on-hop-off touring experiences around the North and South Islands. Guided tours by G Adventures, Intrepid Travel and Contiki (strictly for 18-35 year olds) can also be booked. For day trips and discounts on local attractions, check sites like BookMe, Viator and Groupon.

Trekking enthusiasts will love the Te Araroa Trail, which runs the length of both islands. The North Island half stretches roughly 1,600km from Cape Reinga all the way to Wellington.

Ferries Between the North and South Islands

Choose between Interislander Cook Strait Ferry and Bluebridge Cook Strait Ferries for a relaxing three-hour sailing through the Queen Charlotte Sound and Marlborough Sounds on your way from Wellington to Picton. Bring your car along, watch a film in the onboard cinema, hear live music in the lounge or take in the view from the top deck.

Freedom Camping is huge in New Zealand, but only if you follow the rules, camp in the right places and leave nothing behind. You’ll also find everything from hostels and poshtels to familiar chain hotels, luxury lodges and Airbnbs in the North Island.

Paihia (The Bay of Islands)

Just a short ferry ride from Auckland’s CBD, Waiheke Island is where you’ll find wineries, zipline adventures and a chance to get back to nature in a place that’s as popular with Kiwis as it is with international visitors.

If you only splurge on one thing when you’re in New Zealand, let it be a guided tour of the Hobbiton Movie Set in Matamata, which fans will recognize as “The Shire” from Lord of the Rings and The Hobbit. If you don’t have a car, add transport from Auckland or Rotorua to your ticket, which includes a free beer from “The Green Dragon” pub, also featured in the films, at the end of your tour.

Pronounced “fa-ka-where-a-where-a,” this living Māori village offers an inside look at how geothermal wonders helped shape the lives, homes and traditional cooking customs of New Zealand’s indigenous people, and see a cultural performance featuring the Haka.

Whether you choose to take a boat ride, walk through Ruakuri Cave or try your hand at black water rafting, this glow-in-the-dark natural wonder is sure to impress.

Get a good look at Huka Falls, a powerful rapids type of waterfall located 10-minutes by car from Taupo, from one of the bridges at the lookout point. For a real treat, hike two hours alongside the mighty Waikato River and end your trip with a free dip in the natural hot pools at Spa Park on your way back into town.

This challenging and unforgettable 19.4km trek takes you up and down three active volcanoes—Ngauruhoe, Tongariro and Ruapehu—across colorful lava fields and through some of the most amazing scenery in the country.

Learn more about the history of Aotearoa and its first peoples at Te Papa, a free world-class museum that’s home to exhibits on all things New Zealand, including Māori moku (traditional tattoos) and legends, British colonization and art, native birds and other Kiwi creatures, earthquakes, contemporary refugees and an impressive exhibition about Gallipoli in WWI that was designed by Peter Jackson’s WETA Workshop.

Kaitoke Regional Park is where Peter Jackson and the Lord of the Rings cast filmed Rivendell, kingdom of the elves. Take some photos by the Elvish gates and check out the swing bridges in this beautiful natural space within an hour’s drive of Wellington.

Fans of Lord of the Rings, The Hobbit and any of Peter Jackson’s films will want to visit the Weta Workshop for behind-the-scenes tours and a chance to take a closer look at the magic behind the camera. Don’t leave without taking a photo with Gollum and the enormous trolls at the gift shop.

Whether you choose to hike or drive up Mount Victoria, you’ll be rewarded with gorgeous views of Wellington Harbour and CBD and have the chance to spot airplanes taking off and landing from nearby Wellington International Airport. Follow the signs along the trail to see where several scenes from Lord of the Rings were filmed.